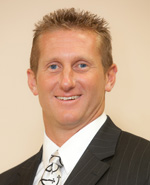 Joe began his 24th year in the financial industry on June 1, 2018. He specializes in Retirement Planning (403(b)’s and PSERS) and handles property and casualty insurance through Nationwide.

Joe is a graduate of Penn State, where he majored in Business and Exercise Science. He played football where he was a receiver for Penn State and was a member of the 1986 National Championship team that defeated Miami in the Sunkist Fiesta Bowl.

H. Beck, Inc. is not affiliated with Nationwide.